"We need to act, behave, and build as if we are in the dawn light of an emerging new thriving, collective, regenerative new set of systems, not the dying days of a crumbling, divided broken one."

"Belief is a kind of rocket fuel"

It's a full and blue moon, crossed with seasons. The dead and the otherworlds are leaking into our own subconscious reality. Move fast, leave offerings, and stay silent.

Samhain: A Time for Listening to Ghosts

Under the celtic calendar, we've reached the period of Samhain ("Sow-in").

"As at Beltaine, special bonfires were lit. These were deemed to have protective and cleansing powers, and there were rituals involving them. Like Beltaine, Samhain was a liminal or threshold festival, when the boundary between this world and the Otherworld thinned, meaning the Aos Sí (the 'spirits' or 'fairies') could more easily come into our world."

Ancient Samhain rituals involved communication with the dead - including leaving out meals, opening windows and updating the deceased on news, while sprites and other entities were abroad.

Today we collect sweets instead of harvesting the land, and carve pumpkins instead of turnips. Scary sells, but is there something more comforting about these liminal spooks than we appreciate?

As we hide away from ethereal creatures and unseen viruses running amok, what difference is there between ghosts at the edge of our vision, and our fascination with the strangeness of nature? Is the thrill of spotting a fox, or of birdwatching from a distant window, the same as leaving food out for fairies? When we spot a badger lying at the side of the road, do we not wish we had known it when it was fully alive? Perhaps the otherworldness of Halloween matches up neatly with the other-ness of nature in general: a binding between the world we want to run from, and the world we've walled ourselves away from.

Similarly, are the dead to be feared, or should we take the opportunity to reflect on where we've come from as a species - our own bones built on top of the efforts and genes of our ancestors. This land we walk on, do we really understand the histories folded into it, and the past lives that layer beneath our own continuing existence?

What can we learn by listening out for the strange ones, and by talking to those-who-came-before-us? 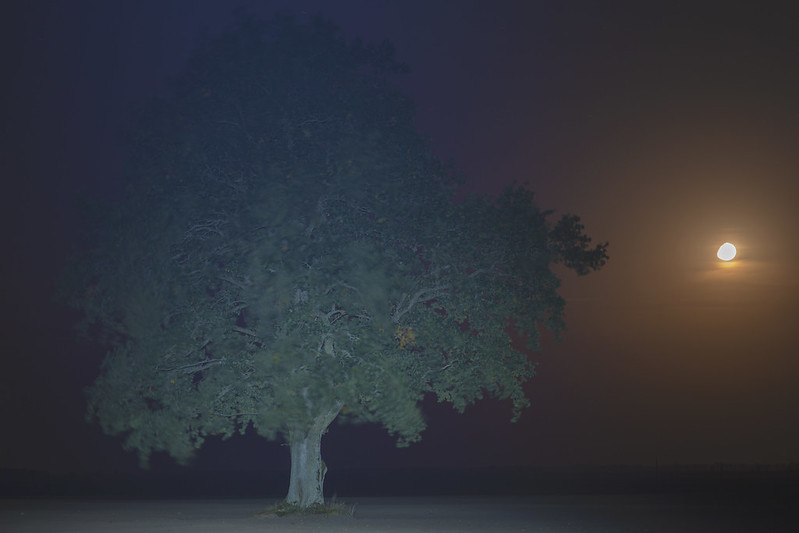 On the other hand, what do we leave to our own children as our legacy? I find it hard to imagine a world in which our national borders are clearly delineated on virtual maps, and yet the flows of energy - trade, ideas, migratory animals - cartwheel through the world around us. There is a pressing narrative, it seems, that says we must keep hold of the strictest definition of "sovereignty", even while the definition itself is nothing but a bleached carcass scattered across a desert.

The daisugi style of growing bonsai tree wood in Kitayama, Japan, uses an inter-generational approach to tree planting - as a tree takes two generations to grow before it can be used, a farmer will use the trees their grandparent planted, and will in turn plant trees for their grandchildren to use.

(On a more extended timescale, and for more general purposes, the Iroquois perspective is to look ahead seven generations. This is also useful, but as a society, we seem so far removed from this idea that looking ahead even six months feels like a taboo sometimes. Thinking through trees for grandchildren gives us a timescale and a locality - our own bloodline - that we can relate to easily, one hopes, as an exercise for noobs.)

Naturally, there aren't many family forests where I live. (There are communal rural lands, and community-driven green spaces. These places exist, and are liminal to the extent that they survive somewhere between the individual and the state.) So how can I take the same mindset of daisugi agriculture, and apply that to where in my life I am right now?

What can I do now to set something up for two generations' time? What are the fundamental things that could and should form a thread of time between this day and that one? Clearly, one cannot assume what the future brings - I don't intend to set aside anything in the mild hope that something may be useful. Nor can one try to influence generations too much - something set aside for future use should not be dictatorial, should not come with strings attached. We should gift things to the future.

There is a core aspect then, that what we pass down should be respectful, timeless and considered. How about a starter for three?

Perhaps these three are just a personal preference: If that makes it easier for me to be practical about it, so be it. A philosophical time capsule for my kin.

Would others cherish other values more? Would they/you/us see and interact with the world through different eyes and a different ethos? Quite certainly.

So I don't want to set this as an absolute - perhaps you have your own values and ideas? This is just a starting point. Where could it go next?

Death as a Portal

...all of which points at something that's been gnawing away at me for a while: Instead of thinking of death as an end, can we think of it as a link, through which reflection and change are channeled? Within death - not an individual ceasing, but the concept of death as the yin to birth's yang - can we find the miniscule hole through which one time can pass a baton to another?

To follow the thread further, if we were to see the world through death as this series of "infinite filters", can we escape the immediacy of everyday life, and all the stagnation that builds up when we forget that things came before and things will come after?

In short, once you have faith in the past and hope for the future, what do you no longer need to worry about? What do you lose the desire to own, or achieve? For any feedback, suggestions, broken links, comments, or general 'hi there' type stuff, leave a comment, or you can find me hanging out in any of these places:

I'm also documenting my own 'everyday solarpunk adventures' over at the 6suns blog. This week I have mostly been working out how not to solder batteries.