Chunfen, Thunder sounds and cherry blossoms open for the first time. It's a full moon, and it's time for another edition of Beamspun.

Over here in my corner of the world (your local mileage may vary), the short days of winter have become legends, and the pale yellow lines of morning that Spring brings are scything through darkness, sounding cornets to rally forth the flower heads.

I stroll round, taking it all in. The garden and hedgerows are proudly boasting their potential - fresh tree blossoms make whispered promises, congregations of tiny flowers jingle in the wind, and bumblebees dart round, dizzy on the sudden buffet choices.

And not just the bees. As I wander, I wonder what each plant is. Some I'm familiar with now - snowdrops, cow parsley, daffodils, the basics. Some even have several names, like stickyweed and cleavers.

Others I have seen before, but I can't identify. I have a pattern for these - I take a photo and a mental note, and try to look them up in one of the few identification books I have, or on the net. Most often, I flounder and scratch my head between all the plants that look alike, and give up.

Traditionally, I get slightly annoyed at that point - why do they have to look so similar? Why are there so many plants in the world? My desire to name the things takes over and I feel like I've failed in my studies.

This year, though, I'm more relaxed. What's in a name, after all? Or rather - what isn't in a name? What gets left behind by a photo in a book and an entry in an index? Can even the greatest tome tell us what signs to look for year-on-year around our own corner, or how a particular plant sways in the wind? Are the pages scented with crushed leaves, or decay so specifically?

As Robin Harford says, "Little by little as you engage with a plant, pay attention to it, and love it for who it is."

Happy worm moon by the way. 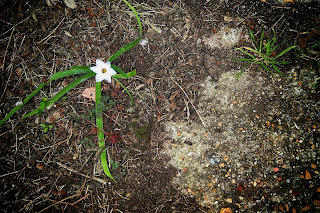 (photo by Patrice78500/Wikimedia Commons, via Treehugger)

And if you're interested, I'm also documenting my own 'everyday solarpunk adventures' over at the 6suns blog.